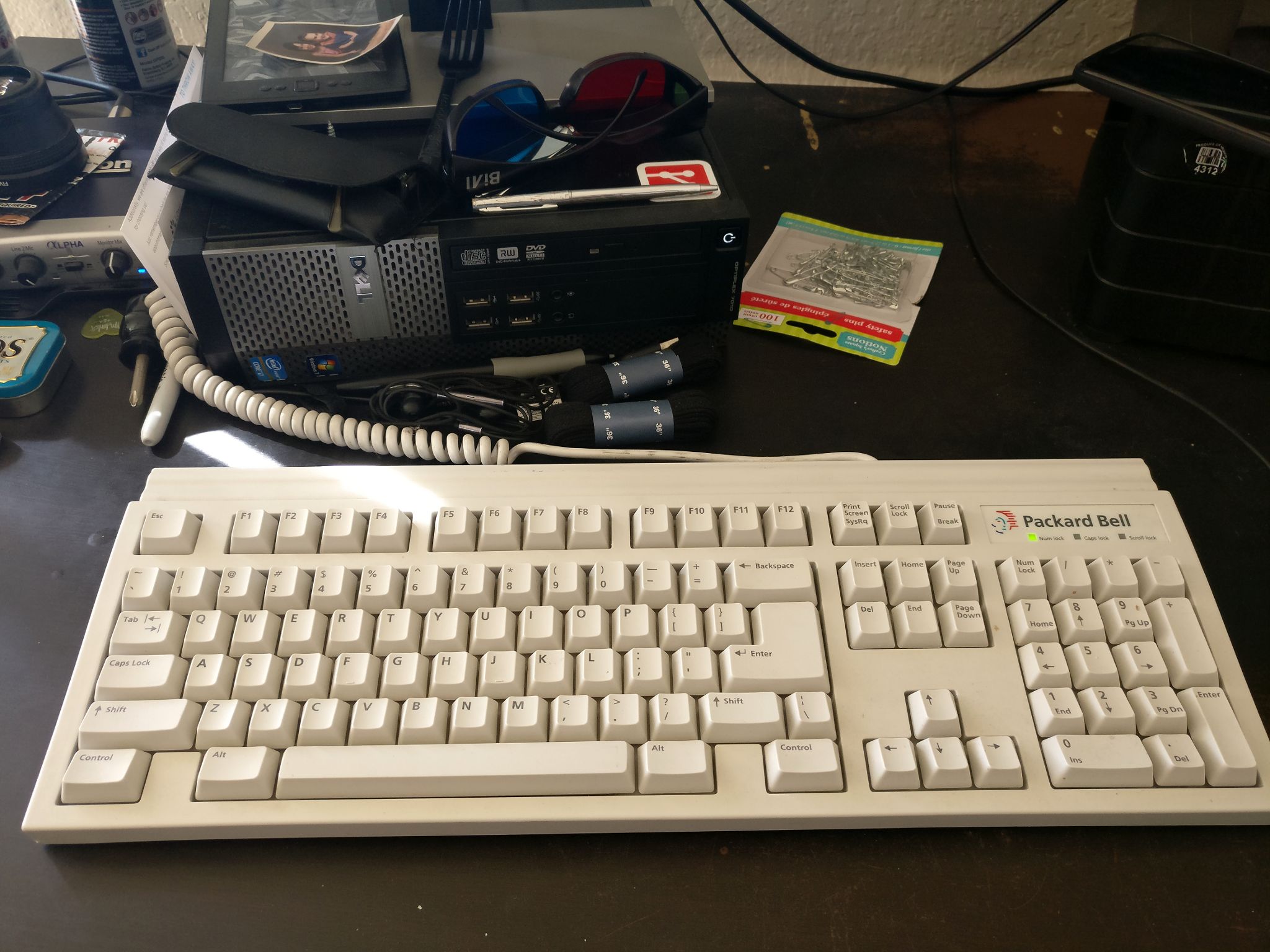 In the last few years something magical has happened. Without anyone knowing it the speed of modern computers plateaued. Because of this trend business class hardware from a few years ago is not only nearly as fast for most uses but now can be bought for a fraction of the price of new hardware. Dollars to cycles your best bet is hardware from 3 to 4 years ago.

Mechanical Keyboards from long ago.

I spend a lot of time in front of a physical keyboard. It comes with the territory. The keyboard on my laptop is not bad. Even though this is a budget machine the typing experience is quite good.

A few years ago I was using an old aluminum Apple keyboard. I liked the look of it. They keys where a little springy. I like when the keys kinda push back on your fingers. Makes the repetitive process of typing a bit nicer when it feels like the keyboard gives back a bit.

Once my clumsy hands finally broke a key I found that it was not as easy as reattaching a key cap. The tiny thing plastic arms that gave the keys that bounce are surprisingly fragile. Not willing to drop the money on the replacement key and switch I ended up picking up a cheap back lit keyboard. At first the membrane keys didn’t feel that bad. After a bit of use I found that my key presses didn’t always register. It wasn’t a huge deal breaker. I’d easy type paragraphs before this issue would resurface but it really bugged me.

I knew that a decent mechanical keyboard might be the solution for my typing needs and I looked at a lot of budget options from major manufactures. None in my price range offered what I wanted. A friend of mine had an old PacBell PS/2 keyboard. These old beasts were an attempt at recreating IBM Model M. Metal frame, buckle-spring keys, and ugly off white color. He had no interest in it and was going to take it to donation. I snatched it up and plugged it in.

Holy shit what a world of difference.

Keep in mind that not all computers come with a PS/2 port. There is a slight chance that a few readers might have never even heard of this rather dated connection type. We’ve been in the realm of USB keyboards for easily over two decades and if it was not for the fact that my desktop was a business class machine I might not have had the appropriate connection.

There are a few limitations to such an old keyboard. The enter key is the tall/fat variety. Because this keyboard was often shipped with DOS or Unix, there was no such thing as a Windows key. Don’t even get me started on that dreadful off white color that I know will eventually turn yellow. It goes without saying that multimedia keys are not an option either, but that is easily solved by remapping.

I thought that there might be some lag or slowdown compared to the USB but the more I think about it, it’s probably more likely the other way around. Other than the very ugly color this keyboard is an absolute dream.

If you’re interested in an older mechanical keyboard, don’t head to eBay or amazon as you’ll probably get over charged. After discovering these older keyboards I’ve seen them at the local swap meets for as low as only a few dollars. They’re rugged as hell and usually work flawlessly with a little clean up. If they’ve yellowed up real bad a simple treatment of Retrobright is usually enough to get them sparkling once again.